The Astrology of Kevin Barnes and Mercury Out of Bounds

Perhaps you are familiar with Kevin Barnes and Of Montreal, the art-rock/funk/indie band formed by Barnes in Athens, Georgia, in 1996.

I’m here to examine Kevin Barnes, who has been the artistic mainstay of the band for twenty years. According to the INTERNET, he was born on May 30, 1974. We don’t have public data regarding his birth time, but I have a feeling he’s a Libra rising with his Moon in the first house. Here is my presumption of Kevin Barnes’ birth chart: 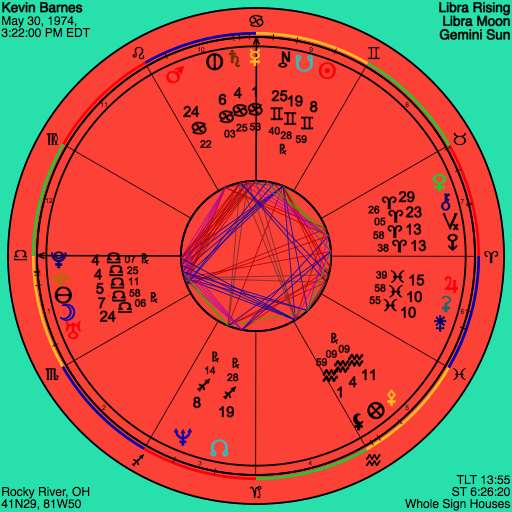 Mercury is at 1 Cancer, and out of bounds at 25 degrees North

And here is Kevin in human form: 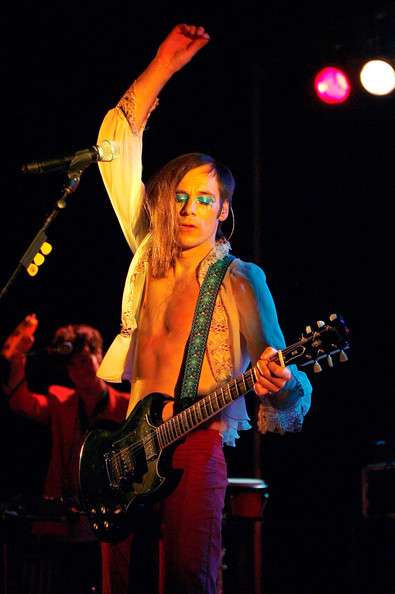 The focus of this post is Barnes’ Mercury, which you can see in the chart above–right at the top, at 1 degree Cancer. And of course, way out of bounds.

The Mercury of Kevin Barnes

Now, to the implications.

Mercury in Cancer likes to play with different voices and characters, and is very performative in speech. Those with Mercury in Cancer would have a knack for voice acting, and dexterity with intonation, even if their face and body aren’t following suit. Kevin Barnes is no exception. He writes and sings from various personas (including the way-out-of-bounds Georgie Fruit). He switches from falsetto to spoken word mid-sentence. In the recording studio, he layers dozens of vocal tracks on top of each other (as heard in “Gronlandic Edit” above @ 1:35… “Forget, forget. Forget forget forget. Oh no the beauty’s wasted”). Barnes is quite successful transforming his auditory imagination into artifact. This requires powerful focus, which is represented by Mercury’s conjunction with Saturn.

Saturn is, notably, in Cancer–opposite from its favorite space, Capricorn. In a lot of charts, this could indicate a blockage between a person’s feelings and their expression, or an inability to properly organize/systemize and create helpful structures in life. This could also be flipped on its head in a positive way, as we see with Kevin Barnes.

In Of Montreal’s most masterful work, the audience witnesses Barnes working through his emotions by weaving fictional and autobiographical narratives into one. Thus, personal catharsis is achieved through creating structures that fill the Saturn-in-Cancer Canyon between deep feeling and expression. And it seems to be Mercury, the storyteller, who enables this transfusion. On the perhaps-downside, much of Kevin Barnes’ out-of-bounds diction will have you reaching for a dictionary (or, let’s be honest: Google). Emotions are expressed on the intellectual plane, and though this has led to great work for the public to enjoy, it can be frustrating to experience personally.

In any harmonious aspect, these two planets combine to foster great creativity, especially in regards to arts created with hands, words, or voice. What artform requires all three? Often, song. By looking at the sign placement of Mercury and Venus in their sextile, we can form an idea of just how this such music might sound. And since we’ve already examined Mercury in Cancer, let’s look at Venus in Aries.

Kevin Barnes’s Venus is placed at the final degree of Aries, 29. We call 29 the diurnal degree, and this degree is thought to possess a lot of power for a given sign. Think of it as the final push before the transition into the ensuing expressive field–in this case, Taurus. So in Kevin Barnes’ case, Venus is Aries is turned up to 11. And this is quite audible in his music. Up until Of Montreal’s most recent album (the intentionally slowed-down White is Relic/Irrealis Mood), their catalogue is extremely up-tempo. Venus in Aries has something to prove, which, for a musician, can lead to fast, fiery playing.

*personal anecdote* I saw Of Montreal in St. Louis in 2008. It was the very first night of their tour for Skeletal Lamping, Barnes’ most courageous and ambitious (or rather, Aries) album. And the band had a lot of difficulty keeping up with all of the new material’s complexities: sudden shifts in tempo, time signature and key, constant blends of organic and manufactured sound. The musicians needed to know their parts forwards and backwards, and they weren’t there yet. And the players were world class. Sinkane was the drummer. Barnes, the songwriter who wrote and recorded every note, didn’t miss a beat.

We can also hear Venus in Aries expressed through Mercury in the timbre of Barnes’ singing voice. As noted earlier, Kevin Barnes’ singing is incredibly performative and theatric, and in the studio, multi-tracked to the sky. It is the thin tone of Barnes’ voice that makes space for all of these layers. Had Barnes been born a day later, his voice might have been more full with Venus in Taurus, Venus’ ruling sign and the sign that rules the throat. As it stands, Venus in Aries (a sign of disablity for the planet) lends to a voice that is, in immediacy, not easy on the ears. And this fan wouldn’t want it any different!

The centerpiece of masterwork Hissing Fauna, Are You the Destroyer?, “The Past is a Grotesque Animal” serves as a 12-minute death and rebirth from the album’s autobiogaphical first half to into the second half of persona fantasy.

Three weeks after Kevin Barnes’ birth, Mercury stationed retrograde in Cancer. This is a very significant moment in any person’s progressions. An astrologer interested in Barnes’ life narrative can look into his progressed chart to find significant periods within this retrograde.

Mercury Out of Bounds

Mercury is clearly a big player in Kevin Barnes’ natal chart. And its positioning out of bounds has everything to do with Barnes’ most exceptional traits. Really, you can see its omnipresence in all of the sections above. And it’s quite literal when thumbing through his loquacious and unending wardrobe. The art and literature he alludes to in his lyrics and song titles are nothing short of obscure, intellectual, and non-traditional. And some of his personas are even more out of bounds than Barnes himself. He describes Georgie Fruit in an interview with Pitchfork:

“The character’s name is Georgie Fruit, and he’s in his late forties, a black man who has been through multiple sex changes. He’s been a man and a woman, and then back to a man. He’s been to prison a couple of times. In the 70s he was in a band called Arousal, a funk rock band sort of like the Ohio Players. Then he went through a few different phases.”

And a quote from Georgie Fruit himself, on Skeletal Lamping‘s “Wicked Wisdom”:

“I’m just a black shemale. / And I don’t know / what you peope are all about.” The second sentence could be taken directly from my own writings on the nature of the out of bounds moon:

“A beautiful trait of the out of bounds moon is a wide awareness and vision of what the hell is going on with these humans.”

If you have Mercury out of bounds and you haven’t invested time in Of Montreal, I’d seriously consider it, just for the experience of gaining the knowledge that you are not alone. You are not the only alien out there! And if you are Kevin Barnes, hit me up! Let’s do a reading!

Out of Bounds Planets, The Astrology of